Do your bit! Help protect
our white-clawed crayfish

FOLLOW US
ON SOCIAL MEDIA
SURFACE WATER TEMP:  19.3 °C    UPDATED:  16-06-2021
SURFACE WATER TEMP:  19.3 °C
Did you know Vobster Quay is home to native white-clawed crayfish?
Discover how you can help protect this endangered species.
PROTECT OUR
WHITE-CLAWED CRAYFISH
PROTECT OUR WHITE-CLAWED CRAYFISH
Vobster Quay is proud to be recognised as an 'ark' site for the native white-clawed crayfish. Introduced into the lake in 2009 by researchers at the Bristol Zoological Society, Vobster is playing a key role in protecting this endangered species.
It's important that we protect our special waters from the threat of Invasive Non Native Species (INNS). By being aware of INNS and by implementing some basics procedures before heading to the waters of Vobster Quay, you can do your part to protect Vobster's colony of white-clawed crayfish. Animals and plants that have been introduced by human actions to parts of the world outside their natural range are known as non-native species. Most do not cause any problems in the UK. Here at Vobster, for example, you'll find one example of an invasive non-native species - zebra mussels. Whilst the zebra mussels pose no threat to our crayfish, visitors should still rinse and dry their kit after visiting Vobster to avoid potentially spreading the zebra (or their larvae) to other freshwater sites. A small proportion, however - known as invasive non-native species - can cause serious and permanent problems by harming ecosystems. They can be bigger, faster growing or more aggressive than native species, and may also have fewer natural predators to control their numbers. Native species are often unable to compete.
Recently visted another site?
If you have recently visited other freshwater sites before coming to Vobster, please ensure you thoroughly RINSE & DRY ALL EQUIPMENT before your visit. You could inadvertently be carrying crayfish plague (or even tiny invasive crayfish juveniles) into Vobster. If the Vobster crayfish get infected, the entire population is likely to die out within weeks!
What to look for
Unsure what a INNS make look like? Check out this very handy and informative identification guide produced by Cheshire Wildlife Trust.
Photos courtesy of John Price & Kenrina Maidment 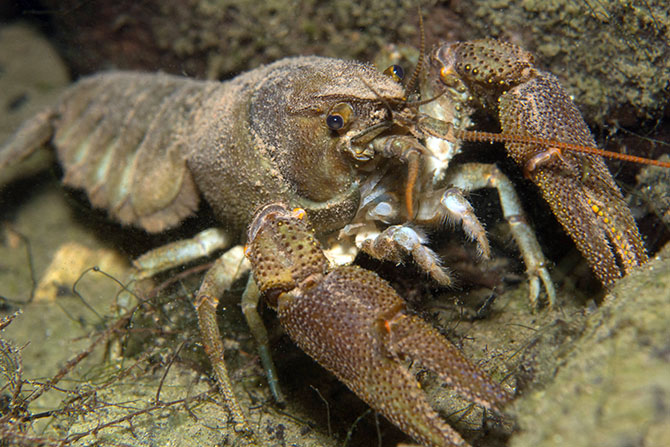 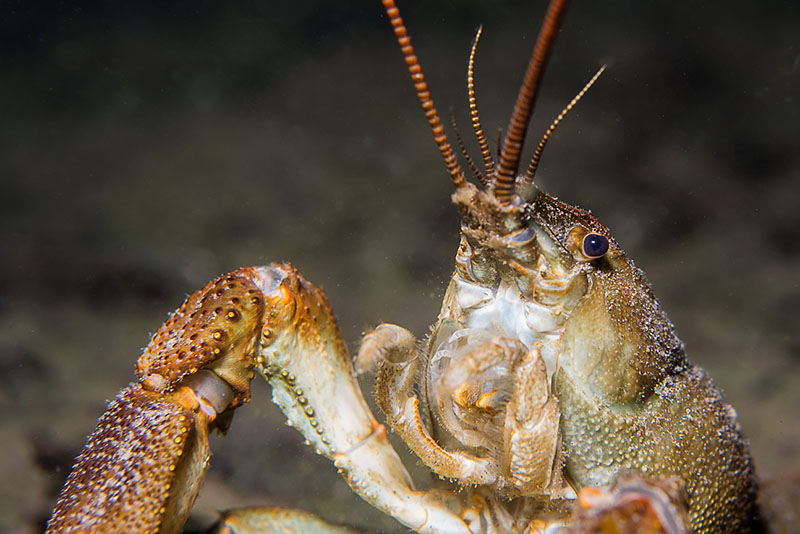 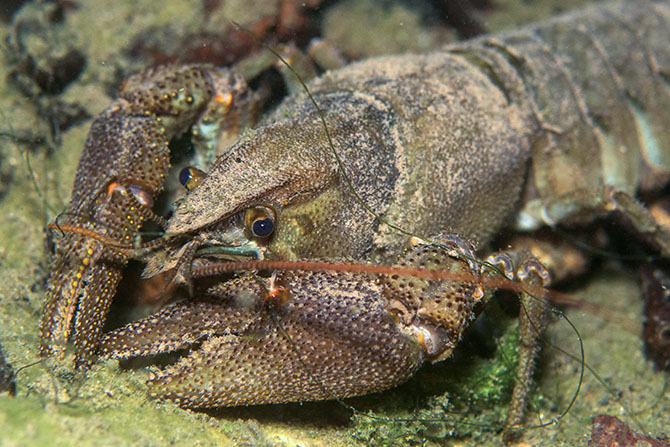 WHAT ARE
WHITE-CLAWED CRAYFISH?
ABOUT WHITE-CLAWED CRAYFISH
We're very protective of our 'Vobster Lobsters' (as many of our visitors call them). Whilst most divers may never be lucky enough to see one, exploration of the shallower areas of the lake will often turn up a sighting!
As the UK's only native freshwater crayfish, the white-clawed crayfish is in decline due to the introduction of the non-native and highly aggressive North American signal crayfish. This invasive species has brought disease to which our indigenous crayfish has no natural resistance. An omnivorous crustacean, the white-clawed crayfish eats invertebrates, water plants and dead organic matter. It inhabits small freshwater streams of a depth less than 1 metre (although they're often found deeper at Vobster Quay), hiding underneath stones and rocks and in small crevices where they forage for food. They can grow upto 15cm in length.
More Information 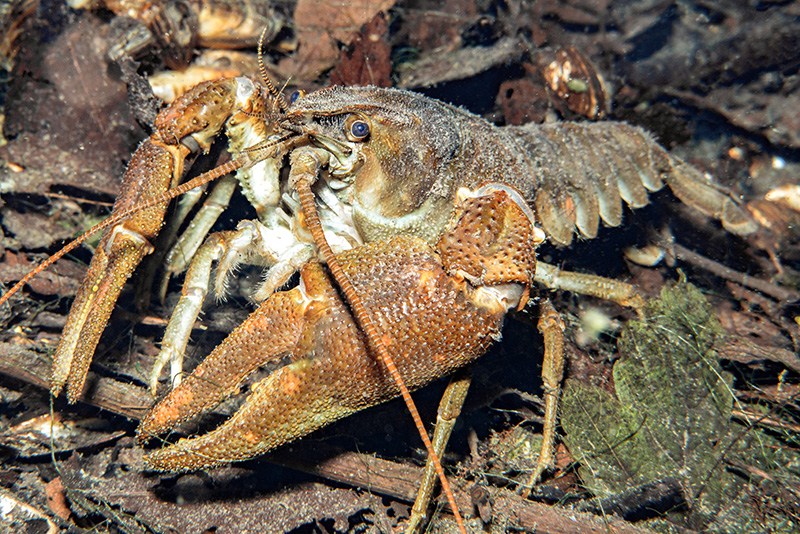 Photo courtesy of Kenrina Maidment
HOW YOU CAN HELP
Whether you're an open water swimmer or a scuba diver, you can do your bit to help protect our colony of white-clawed crayfish by following these very simple guidelines.
Visitors to Vobster Quay are encouraged to ensure that their equipment and exposure suits do not transfer invasive non-native species to the waters here at Vobster Quay. You can do that very simply by following the advice outlined within the box opposite. We are working along side Bristol Zoological Society to raise awareness and monitor INNS in our area. The South West Crayfish Project is working hard to prevent the extinction of white-clawed crayfish. One method is to move wild populations that are under threat to new, safe 'ark' sites. Vobster Quay has become one of these valuable ark sites. Because Vobster Quay is a white-clawed crayfish ark site, it is susceptible to crayfish plague carried by the invasive American signal crayfish. The disease can stay viable on damp gear for up to 2-weeks. If you have been to other freshwater sites before coming to Vobster and have not rinsed and dried your kit, you could inadvertently be carrying crayfish plague (or even invasive tiny crayfish juveniles) into Vobster. If the Vobster crayfish get infected, the entire population is likely to die out within weeks! We want you to enjoy and appreciate the white-clawed crayfish that we have at Vobster Quay but please afford them the same respect we hope you'd show any wildlife. Do not touch them or interfere with their movements in any way - just enjoy watching them going about their business. If you're lucky enough to see one, tell us about it - see the box opposite on how you can provide valuable data to us.
Check, Clean & Dry
Below you will find some very simple steps you can take to help us protect Vobster's colony of white-clawed crayfish.
Spotted a White-Claw?
Have you spotted a white-clawed crayfish during a dive at Vobster Quay? We want to hear about it! Please contact us stating the time, date, depth and location you spotted the crayfish. Any extra info such as the number and size of crayfish spotted will help too!
FOUND A SIGNAL CRAYFISH?
You may think that trapping and eating signal crayfish at other sites may be helping our native species, in reality you may be making the situation worse.
In most cases, only the bigger crayfish are caught and removed. These larger animals hold territories and prevent small animals from breeding. Take them out of a population and the little ones seize the opportunity and start to breed and you get a population explosion, which can lead to a biological desert where the crayfish destroy the entire ecosystem.
Don't break the law!
Whilst it may be tempting to catch signal crayfish, doing so in the UK is actually illegal. In order to legally trap any species of crayfish - including invasive species - you need a licence from the Government. Please leave signal crayfish removal to the licensed experts by reporting your sighting to alertnonnative@ceh.ac.uk